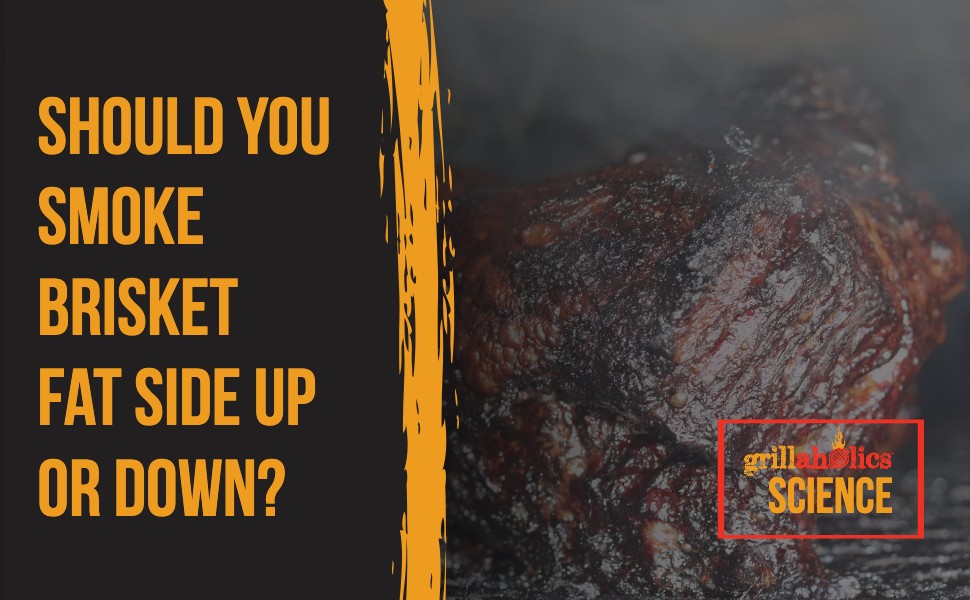 This is a great question that every would-be pit master will ask at one point or another.

Smoking Brisket fat side up vs. down is one of those debates in the barbecue world that rage on to a point of near-endless conversation.

We'll start by saying, there are strong voices on both sides of the debate.

There’s also a whole lot of misinformation making its rounds through the meat smoking crowd.

Today, we’re gonna look at smoking brisket from a completely scientific level to sort out the fact from fiction.

To outline the debate here, we need to really understand brisket as a cut of meat.

Brisket is made up of two distinct, different layers: the point and the flat.

The point is the thicker end, where you’ll find most of the fat. The flat is the thinner, slightly leaner side.

The point of contention, though, is which side should face down on the smoker.

Smoking Brisket Fat Side Up:

The fat-side-up believers make a strong case for themselves, at first glance.

One of the chief arguments is that the fat will ‘melt into’ the rest of the meat, effectively braising and basting the brisket as it cooks.

They say this results in a more tender, flavorful meat without much extra effort.

Unfortunately, that idea doesn’t quite stand up to science.

Instead, the melted fat runs off of the meat, washing away any seasoning you may have put on your brisket.

On top of that, cooking fat side up isn’t going to give you that beautifully-presented bark that would otherwise happen.

Unless you have a top-fixed heating element (more on that later), cooking fat side up isn't doing you any favors.

Ultimately, the ‘cons’ of cooking fat side up aren’t going to ruin your brisket.

Smoking Brisket Fat Side Down:

But, cooking fat side down has significant benefits that are worth considering. For one, you don’t have the issue of melted fat washing away your seasoning.

That same fat also works as an insulator for your leaner piece of meat. It ensures that the brisket doesn't get exposed to overly-intense heat, which may cause it to dry out.

Some chefs and home cooks like to flip their brisket as it cooks, taking a sort of half-and-half’ approach. If you know your smoker has an uneven temperature gradient or is prone to hotspots, this might not be a bad idea. Otherwise, leave it be.

All of that said, the main thing to consider when smoking your brisket is where the heat is coming from.

The above-listed tips and tricks really only apply to common, bottom-up smokers.

If you’re using a horizontal smoker, the heat supply is often found right above the brisket. When that’s the case, you will want to go fat side up.

At the end of the day, the best answer is to get to know your smoker. Learn how its heat is distributed, and go from there.

Our rule of thumb for cooking brisket fat-side up or down?

Always point the fat towards the heat.