An Item Was Added To Cart!
X

FREE Shipping on Orders Over $35!

I recently purchased the Essentials Grill Brush for me and my family. I continue to be amazed by the quality, service, and experience that I have with this company. I've purchased the Grill Mat, Burger press, and now the brush. I am thoroughly pleased with the products, and my gift recipients have all raved about them. Thanks, Grillaholics!

This is the second product that I have bought from this store and they are both fantastic quality. I contacted them with a question and they responded right away. They noticed my email was military related and went above and beyond to make sure that my family felt their appreciation for our service. A brand that actually cares!

I saw an ad for the grillaholics grill brush, early in the Winter, and decided to buy several to give to friends and one for myself. Everyone loved them! Since I hadn't used mine yet, and a neighbor raved about it to another neighbor, I also gave mine away. So I ordered another one for myself! I have grilled probably 5/6 times and it's Indestructable! I spreading the word! LOVE it! 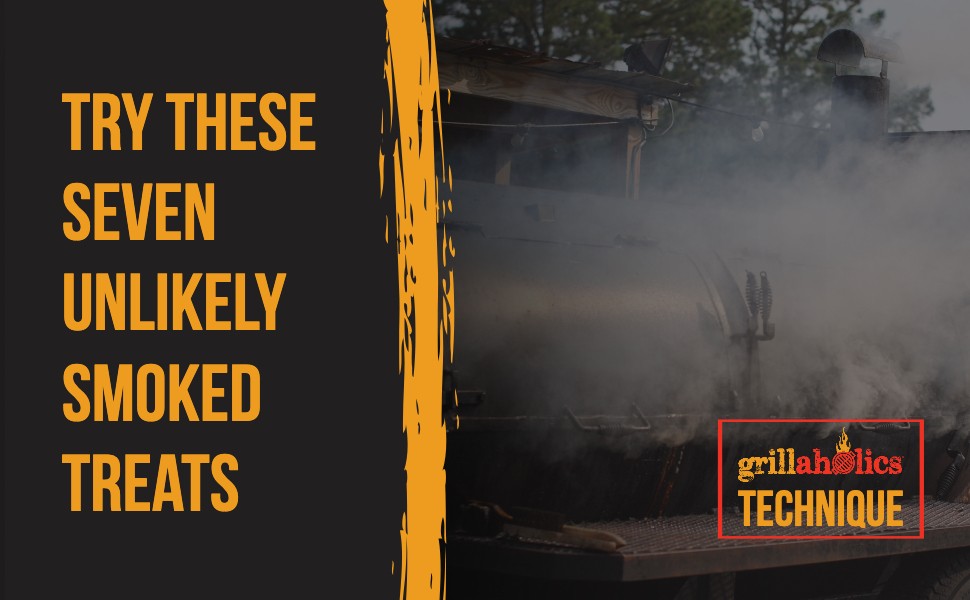 You've probably figured out brisket at this point. Heck, you may have even smoked a whole duck or home-made some bacon. So today, we’re gonna bring some new smoked items to the table (literally!). That robust, not-so-subtle smoke flavor that we've come to love actually pairs magnificently with a huge variety of foods —many of which you probably already have at home. Enough talk, though — lets get into it.

Yes, butter melts under heat. That doesn’t mean it’s disqualified from smoking candidacy. Whether cold-smoking, using a handheld smoker, or using a traditional wood-burning smoker, butter takes smokey flavor extremely well. Obviously, you’ll want to put the butter in some kind of bowl or heat-proof container. Place that container in your smoking apparatus, and then pour the smoked, melted butter into a jar or Tupperware of some kind.

Smoked sea salt is pretty widely available as a pre-made product, but where’s the fun in that? Try spreading some coarse-ground salt in a thin layer on a drip pan. Smoke that for a few hours, or longer if you want even more of that intense flavor. Use this salt in place of standard salt for an upgraded, interesting flavor.

Although not a meal in itself, smoked limes (or other kinds of citrus) make for excellent additions to seafood-based dishes. Simply cut the fruit in half remove any large seeds, and smoke them cut-side-up. If you’re looking to add some nuance to a cocktail, some smoked lime or lemon juice is just the thing!

There are about 5000 types of mustard you can buy, and all of them taste great when smoked. The dark, woody flavor lends well to most things you’d put mustard on, specifically pork-based dishes. Just spread a layer of mustard on a drip pan, and let it go in the smoker for as long as you see fit. We look to the color of the mustard — when it’s significantly darkened from the exposure to smoke, your condiment is ready.

Yep— you read that one right! Although this falls pretty squarely into the ‘love it or hate it’ category, smoked ice makes for an incredible addition to cocktails — specifically a Bloody Mary. Simply put some distilled water in a pan or metal bowl, and smoke for a couple of hours (depending on how intense you're looking to get). Then, fill some ice cube trays with that water, and freeze ‘em up! We suggest using these ice cubes in bourbon or whiskey-based cocktails, as well as the classic Bloody Mary.

Sometimes known as Oklahoma Prime Rib, smoked bologna is an awesomely elevated take on the classic lunch meat. Smaller, deli slices aren’t going to be thick enough to absorb any significant amount of smoke flavor, so you’ll need a whole piece of bologna. Cut it into large chunks —  at least ½ inch thick. Then, smoke these pieces like you would any other piece of meat. Using a rub isn’t required, but it can definitely bring out some of the smoke flavor.

Contrary to popular belief, whipped cream doesn’t have to be a dessert topping. Savory, whipped heavy cream can be an interesting alternative to your standard sauces. As well, try a dollop of smoked heavy cream in a serving of clam chowder or bisque. Simply pour your heavy cream into a heat-friendly bowl, and smoke using your desired method. From there, chill and then whip until stiff peaks are achieved.

Check Out These Great Smoking Tools!

Ready to find out more about our new, and upcoming products? Sign up below.

Back to the top